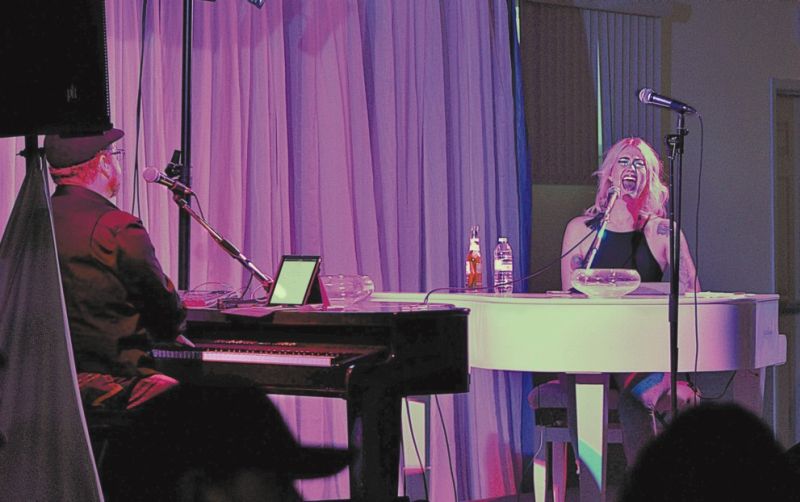 April 4, 2018 –
AMEN
Students at Ecole Heritage have learned about Christ’s sacrifices in their names.
They attended a pre-Easter service at the Ste. Anne Paroisse in Falher during the morning of March 29.
Deacon Reg Bouchard led the service in French and several students took turns reading biblical references.
Also, several students brought offerings to the edge of the stage and Deacon Bouchard held communion for the gathered. Joel Lavoie led a group of students in performing songs for the service.
Grade 2 teacher Julie Desrosiers, one of organizers, noted the students also participated in chemin de croix, or the ‘Way of the Cross’, earlier in the week.
This consisted of 12 activities to understand the burden that Christ endured prior to His Crucifixion.
Chantal Roy’s Grade 9 students organized these activities.

April 11, 2018 –
Seniors Fun Day held at the Club Des Pionniers in Donnelly
There was plenty of action at the Club Des Pionniers in Donnelly on March 22, as 80 people participated in Seniors Fun Day.
There were 40 people for cribbage, 32 for carpet bowling and four for snooker pool, with nine walk-ins as well.
“It was a really good turnout,” says organizer Cecile Turcotte. “Everybody had a good time and enjoyed the food.”
Some people came from as far away as Eaglesham and High Prairie, she adds.

April 25, 2018 –
KAIROS Blanket Exercise, an emotional, informative and cathartic experience participants
Members of the community and Holy Family Catholic Regional Division staff participated in a KAIROS Blanket Ceremony at École Providence on Monday April 16.
A group of HFCRD staff members were trained to present the exercise, which Jamie Chalifoux a Grades 6 to 9 Success Coach at St. Andrews School in High Prairie, hosted.
Also organizing the Blanket Exercise were Charlene Noskey, HFCRD’s Divisional First Nations, Mete and Inuit Education Coordinator, Monica Leonardis teacher at St. Andrews and division learning coaches, Mary Braind and Joanna Baird.
Through participation in the KAIROS Blanket Exercise, participants acquire a graphic understanding of the historic and contemporary relationship between Canada and First Nations.
Using a process of re-enactment with the blankets representing land originally occupied by First Nations, as the exercise progresses the blankets are folded back signifying the diminishing territory and marginalization of aboriginal peoples.
The exercise also illustrates the effects of disease, the devastating experiences and continued repercussions of the residential school system, the Metes and First Nations struggle for land and rights in the face of an arbitrary and unjust system.
The blanket exercise is a moving and edifying experience with the underlying objective of creating understanding and achieving reconciliation between Aboriginal and Non-Aboriginal Canadians.