On the days leading up to the school’s Remembrance Day ceremony, Ecole Providence students watched videos related to Canadian military involvement in conflicts beginning with the First World War. They also read numerous books on the subject and wrote to veterans.

The exercise was to allow the kids to gain a sense of the reality of going to war, such as leaving home and the people important to you, leaving the familiar and facing the unknown with the possibility that one may not return.

In light of those realities, students from Grade 4 and up who are enrolled in Ecole Providence Drama Club, rehearsed a play comprised of vignettes dealing with each of the stages experienced when going to fight for one’s country: enlisting, leaving, fighting, injury and dying, and returning often changed by the experience and the things one has witnessed in war.

Prior to the performance of the play, a student from each class laid a wreath and following an excellent performance by the Drama Club, the kids then recited “In Flanders Fields.”

The playing of the “Last Post” was followed by a moment of silence and the ceremony concluded with “The Rouse.”

Before leaving the Gym, the children thanked the Remembrance Day ceremony guest of honour, Veteran James Conron for attending their event. 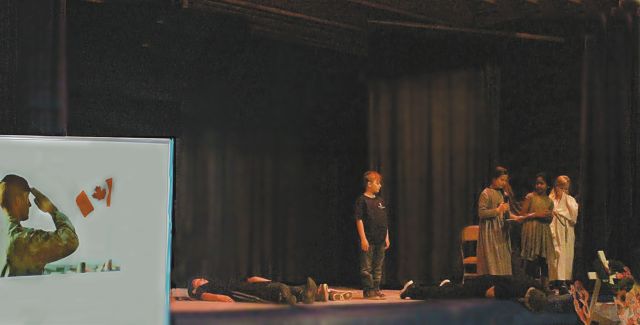