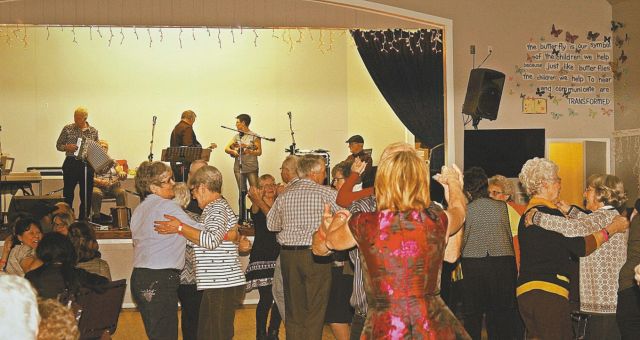 In a letter confirming that Ol’ Tyme Family Nite program is was chosen for the award, FCSS Association of Alberta President, Arnold Hanson stated:

“This nomination clearly describes how Ol’ Tyme Family Nite helps strengthen the social fabric of your community. The spirit and dedication this project brings to strengthening the Smoky River Regional FCSS program and supporting residents to meet their needs is a wonderful example to be shared with FCSS programs across the province.”

Now into its eleventh season, Ol’ Tyme Family Nite, takes place on the second and last Friday of every month from September to the end of May.

The event has established itself as something of a regional institution, a social gathering that is always reliable in bringing the community together to have fun, to dance and of course to enjoy excellent live music provided by the Ol’ Tyme Family Nite Band.

Jean Moore-Lemoine who has been instrumental in the program from concept to reality, continually emphasis that it is the volunteers, the community and a cooperative spirit that has made Ol’ Tyme Family Nite such an enduring success.

“I have been working with people for years and I can honestly say that there are not many programs that last more than a year or two or three and for us to be going into our eleven year, it is really because of the incredible volunteers, especially our musicians.

“We’ve got Gerry and Marie Dubois, William Shaw, Dwayne Isert they have been with us right from the beginning. Then we have those who have been with us between three and five years are Phil, Ann and Cheryl Isert and Nellie Montpellier.”

Moore-Lemoine does not know in what form the award will be presented, whether it will be a certificate, plaque, trophy etc. but she is hoping that it is something that can be easily duplicated.

Ol’ Tyme Family Nite event is looking secure into the future with the emphasis on family as much as ol’ tyme with many younger people dropping by the event to dance, listen to music and perform.

“We have a young girl Elizabeth Isert and she has just being doing it for a little while, and she sings. It is so nice to see the young people wanting to participate.”

On behalf of Ol’ Tyme Family Nite, Jean Moore-Lemoine will receive the Award of Excellence at a presentation following the banquet at the FCSSAA Annual Conference in Edmonton on November 9.