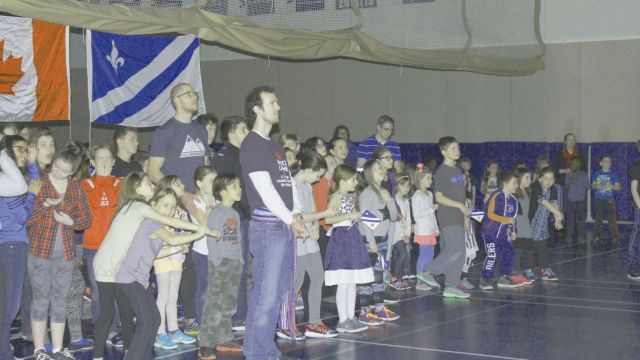 During the RVF, the French Canadian Association of Alberta (ACFA) supports the approximately 25 regions in the province with Franco-Albertan communities in arranging activities celebrating their local Francophone culture.

French and French immersion schools across the province also participate in RVF.

At the École Héritage event, students, teachers and parents assembled in the gym, sang together before the residents of each local community taking their place under the Franco-Albertan and Canadian flags, when the name of that community was called.

The flag raising ceremony is an important event that celebrates the Franco-Albertan identity, its resilience as a minority community and its strong cultural affiliation with this province.

The Franco-Albertan flag, designed by Jean-Pierre Grenier was adopted by the ACFA in 1982.

The flag is blue, white and red, with a white fleur-de-lys in the upper left corner signifying the Francophone community and a red wild rose in the lower right corner representing the province of Alberta.

Established in 1926, the ACFA acts as the official voice of Francophone Albertans. The association’s mission is to nurture and promote the language and cultural interests of Alberta’s Francophone communities.

Celebrating Les Rendez-Vous de la Francophonie, École Héritage has other events scheduled through the month of March, until spring break.