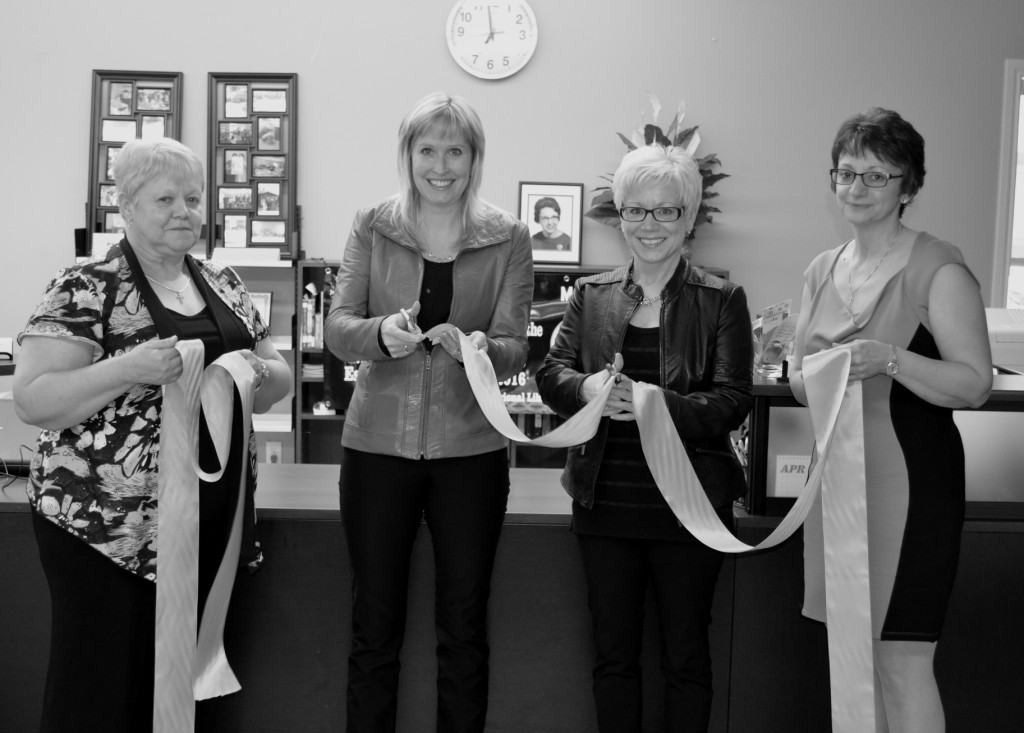 The new inter-municipal library board for the Falher Library is now official. A ribbon cutting ceremony was held as part of an open house at the library on March 15. Above, left-right, are CAO Lilliane Bessette and Mayor Myrna Lanctot for the Village of Donnelly, and Mayor Donna Buchinski and CAO Adele Parker for the Town of Falher.

Members of council for the Town of Falher and the Village of Donnelly took a moment on March 15, to celebrate their new spirit of co-operation.
They held a ribbon cutting ceremony at the Falher Library for the new intermunicipal library agreement they are now part of.
“Our library has seen many transitions since its inception in 1946 by Sister Thérèse, who started with 125 donated books shipped from Quebec to the old convent,” says a news release issued by the former Friends of the Falher Library board.
“These changes were made by previous volunteers and Boards, as the need for library services increased in the community. Each governing group has built on the success that preceded them.”
On hand for the event were Mayor Donna Buchinski and CAO Adele Parker for the Town of Falher, and Mayor Myrna Lanctot and CAO Lilliane Bessette for the Village of Donnelly.
They cut the ribbon near the end of the event and received applause to commemorate the new intermunicipal library board.
The news release also says the Town of Falher and Village of Donnelly agreed to join forces to help ensure sustainable regional library services, and received Ministerial approval to establish a new legal entity – the Falher Regional Intermunicipal Library Board, to continue to provide public library service for their residents and the surrounding area.
Jackie Hockey, who provides a supporting role to the Falher Library, offered insights about the library’s operations with a multimedia presentation.
Hockey pointed out that, every year, more of the circulation is being completed using inter-library and e-resources. Also, the library serves a much bigger population than Falher, which includes people outside the community.
Moreover, the Falher Library is part of the Peace Library System, which provides access to many other online resources.
With the creation of the new intermunicipal library board, the Friends of the Falher Library board is being dissolved, and all of the assets of the former board are being transferred to the new one.
Later, Hockey held demonstrations for some of the online resources the Falher Library has to offer, such as TRACpac and Zinio for Libraries.
Also on hand for the event was Arnold Viersen, the Conservative MP for Peace River-Westlock.
He congratulated the parties on their achievement and presented an award to them, to mark the occasion.