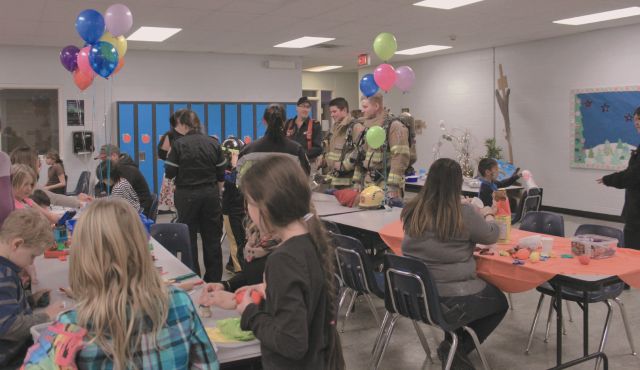 Tom Henihan
Express Staff
@SmokyRiverExprs
Canada’s National Child Day is held annually on November 20 as ratified by the Parliament of Canada as the Child Day Act, in 1993.

On National Child Day, parents, teachers, social workers, nurses, everyone working with children and other organizations are encouraged to participate and to promote awareness of the needs and rights of children.

The theme for National Child Day 2016 was “It’s Our Right to Belong,” a concept aimed at strengthening in kids the sense of belonging within their communities and to nurture in them the realization that they all have the fundamental, unconditional rights to such things as food, a home, the right to have fun and be safe.

In this region, FCSS hosted National Child’s Day, 2016, at Ecole Providence in McLennan and a number of organizations from the Smoky River region also participated.

“We try and rotate each year between Falher and McLennan so everyone has equal access,” says FCSS Youth/Family Programmer Crystal Marschner.

The participation of the RCMP, Ambulance Service, High Prairie Parent-Link and the Smoky River Fire Department was met with an enthusiastic response from the kids in the community.

Members of the Smoky River Fire Department showed up in full firefighting gear to chat to the kids and gave them an opportunity to wear the helmet and visor.

Geeky Pink’s Glittering Body Art and Tattoos were also on hand and as always, there was a long lineup, as every kid at the event wanted a glitter tattoo.

Food was served and a number of complimentary items were available for the kids, such as loot bags with an assortment of items, stress balls, miniature flashlights and a very practical all-in-one lunch containers.

National Child’s Day is to promote children’s rights on November 20 and to remind everyone to ensure those rights throughout the year.