Tom Henihan
Express Staff
@SmokyRiverExprs
The Honey Festival’s “Mead and Greet,” a semi-formal evening offering a number of dishes prepared from local produce with each dish complemented and subtly enhanced with local honey.

The event, which took place on Saturday May 13 featured Edmonton based chefs Doreen Prei and Kathryn Joel who offered a number of cooking presentations and pairing of fine wines and mead.

Mead is an ancient alcoholic drink brewed in various regions around the world for thousands of years. It is made by fermenting honey and water and can be flavoured with fruit and spices.

She has worked in her native Germany, Dublin, Ireland and at a number of renowned hotels and restaurants in Edmonton including Hotel McDonald, Zinc Restaurant and the Petroleum Club.

Kathryn Joel established Get Cooking culinary school in her home in 2011. Get Cooking is now located on the MacEwan University Campus and offers classes in preparing international cuisine using local ingredients to create globally inspired cuisine.

Joel, who is originally from Britain is a graduate of Le Cordon Bleu London and Leiths School of Food and Wine. Prior to moving to Edmonton she has lived in the U.S., Scandinavia and Ontario.

The evening began at approximately 5.30pm with a welcoming glass of champagne and ran until 11pm.

The menu for the event consisted of pate, mead gelee, crostini followed by potato galette salad with truffle honey goat’s cheese and radish.

The braised Alberta Lamb with honey carrot butter and roasted shallots and lentils was served as the entree .followed by Honey yogurt mousse with Saskatoon berries, salted honey and honey biscotti for dessert.

The salient theme of the evening was how honey can be used in preparing food outside its conventional use as a regular sweetener.

The food was an appetizing example of how to use honey creatively to set off and embellish the taste of a wide variety of dishes.

Local singer and vocal coach, Emma Moore, provided the entertainment at the event.

An estimated 135 people attended the event and approximately 30 volunteers, most of local high school students did an excellent job in providing full table service and attending to the needs of the guests. 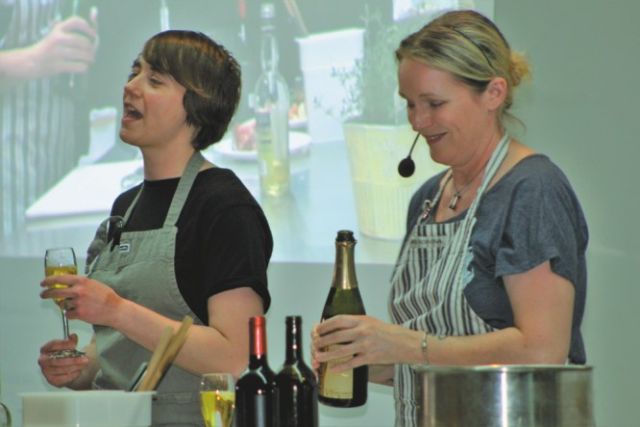