Home News McLennan Library, a hub of activity and a valuable resource for the community 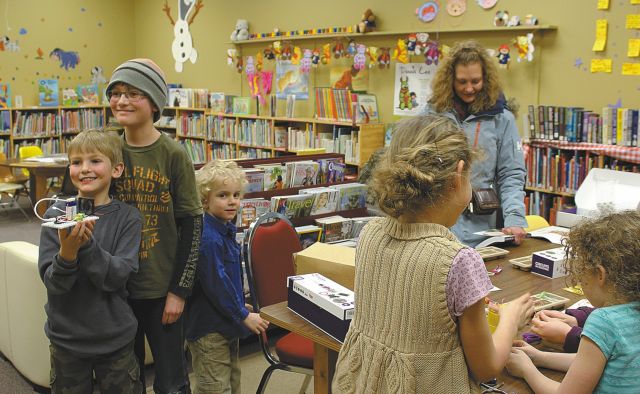 Tom Henihan
Express Staff
@SmokyRiverExprs
Though many people maintain the belief that libraries have lost their relevance in a digital age, the truth is that instead of diminishing their viability, electronic media and digital resources have augmented the range of programming and resources offered by libraries.

Rather than remaining impervious to a changing world, like most other institutions libraries have adapted to the changing dynamics and though their mission and many of the services offered remain the same the means by which they are delivered has changed.

A delegation from the McLennan Municipal Library attended a Town of McLennan council meeting recently to brief council on the library’s 2016 report.

The delegation comprised of librarian Maureen Fisher and Chair of the McLennan Library Board and Town of McLennan representative on the Peace Library Systems Board, Philippa O’Mahony.

Reflecting the continued use of the library and the changes in how people access its resources, the delegation outlined from its report that 5,662 people visited the McLennan Library in person last year.

There were 1,191 virtual visits through the library website and an average of 255 people per week were reached on Facebook with that number increasing considerably when items of special interest were posted.

Noting the library’s existing ease of access and efficiency Maureen Fisher explained to council that such things as interlibrary loans along with numerous other resources can be accessed from the home.

“Our patrons can access us on their computer at home or on their smart phones, browse our catalogue or order an item on interlibrary loan and we give them a call and tell them when their library books are in.”

On behalf of its patrons in 2016, McLennan library borrowed through the interlibrary loan system, 1,541 items from other libraries and loaned out to other libraries 2,357 items. The McLennan Library’s collection totals 12,648 catalogued items at a value of $249,000.

The library has 3 computers available for public use and public Wi-Fi for people who want to access the internet on their own devices.

The library also offers a range of programming that covers the spectrum such as knitting, adult colouring and crocheting which was a huge success with more sessions coming up in April.

The library book club, “Bookworms,” meets the first Thursday morning of every month and is a club that is different to a regular book club.

“In a typical book club everyone reads the same book but we didn’t want to do that. We wanted to get new ideas of what to read.
“Everyone who comes gets five minutes to say what they have been reading that they really enjoyed or didn’t like and the conversation generations a lot more that what is directly in the book.”

For kids there was Tot Time and 1000 Books before Kindergarten, a free program that encourages parents to assist their kids in reading a thousand books before they begin kindergarten.

“McLennan library is the first in Northern Alberta to offer the program and I think we have had 14 people participate and pick up the little packages,” says Fisher.

Other programs offered at the library are Little Bits Electronics for ages 8 to 12, a games café during the summer and also the summer reading club.

Two authors visited McLennan library to give readings and talks last year and another author is scheduled to visit this coming May.