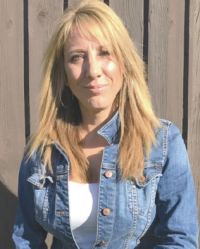 “I had been thinking about it for a long time and finally just figured it’s time to do it,” says Jones. “I’m a doer and if I want things done I just figured I need to step up to the plate and do it.”

She says she is looking forward to learning about the processes involved in the function of council as well as pursuing other objectives such as focusing on getting the community more community oriented and getting the facilities in the community up to par.

A resident of McLennan for thirty years who has worked at Ecole Providence for the last twenty years, Jones is currently president of the McLennan Recreation Board, a position she has held for three of the five years she has been on the board.

“I am hoping that I can continue in that role with the Rec Board because we have been doing so much,” she says.

While this is her first time being on Town Council, Jones is no stranger to sitting on committees, working collaboratively and reaching consensus with others for the benefit of the residents of McLennan.

Among the many organizations she has been involved with are, “The Summer Frolic,” a large annual summer event, the Millennium Celebrations and the planning committee for McLennan’s 100 Anniversary Celebrations.

“The 100 anniversary was a huge endeavor that took 3 years to plan,” she says. “I have also been involved with the youth over the years and did a lot of coaching with basketball and badminton. I coached high school girls’ basketball at G. P. Vanier.

Jones has been looking at the different committees that members of council sit on and there are many she says she would like to learn more about and make a contribution.

“Like Northern Lakes College, that is huge and I’d hate to see us lose that. I would really like to get involved with that. I’d like to be involved with the FCSS part also and get to know what’s going on in the area,” she says. “I take these things seriously. If I join something I am invested in it and I will put the time and work into it.”

Jones is excited about taking on this new endeavor and says she is looking forward to learning from the older, more experienced members of council.

“I am also hoping that we have some new people, some fresh ideas and to be able to help out that way.”