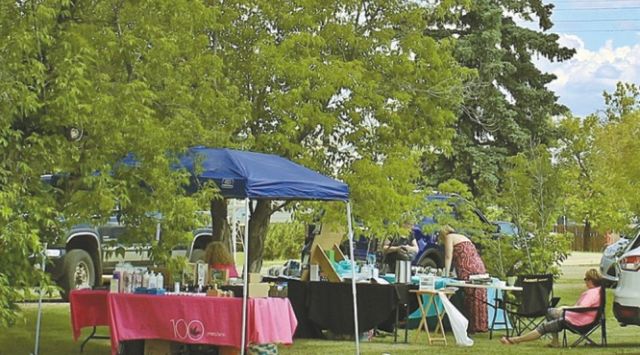 It is good to take advantage of summertime by spending time out of doors and with that in mind, Debbie Pigeon, owner of Li’l Deb’s Tea House and Holistic Health held a number of open-air markets at her property in Donnelly.

Beginning on May long weekend, the markets were held every second Saturday until school was out at the end of June.

“Once school is finished, people go camping or to the lake on the weekends so there is not much point in continuing after that,” says Pigeon.

Each event had approximately 10 vendors primarily from the immediate area but some also from Eaglesham, Peace River and Fairview.

“It was nice to get the community together and we don’t have that very often other than Honey Fest,” says Pigeon. “And it is nice to see that we can get together and have a good time. We should be out there more often.”

To create an authentic social, entertaining environment at the open-air markets, local musicians volunteered to play. Initially Nellie Montpellier and her crew performed and at the final two events, the last one being on June 24, “Rewind” provided the music.

This was the first year Pigeon held the market and she plans to do it again next year.

Like any new venture, creating awareness in the community can be a challenge but she says that the vendors found the open-air concept worked well.