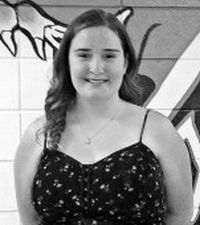 G.P. Vanier Grade 10 student and Honey Festival board member, Hailey Limoges, has numerous ideas in her role as youth activity organizer for the upcoming Honey Festival June 15 to 17.

As youth activity organizer for the Honey Festival where teenagers can’t go to the beer gardens and don’t want to hang out with the little kids, it is Limoges’ mission to create activities that get community youth involved in the festivities.

“I just really want to get the kids out and into Honey Fest because a lot of times they just end-up at someone’s house and not part of community celebrating the festival.”

Limoges says she tried to arrange an “Amazing Race,” similar to the TV program but there is so much going on and with a brand new board, it didn’t really fit in with the program this year.

Instead she plans to put on that event towards the end of August, and if it goes well she will then incorporate the event into next year’s Honey Fest youth activities.

“This year I didn’t do too, too much but the main thing I changed was the midnight swim,” she says. “Now, 7pm to 10pm swim is for all ages and for the 10pm to midnight swim you must be between ages 12 to 18 to be in the pool.”

An exciting idea she didn’t get to implement this year because permits were needed and there was not enough time, is to play the movie Jaws at the pool during the midnight swim.

“Jaws, it is a scary swimming movie and so it would be a little scarier when you see that happening while you are in the pool. Other communities did that and it turned out really good,” she says and adds that it is another feature that she will add to next year’s festival activities.

The midnight swim takes place on Friday June 15 for which the Peace Regional Victim Services and McLennan RCMP Members have sponsored 36 free tickets.