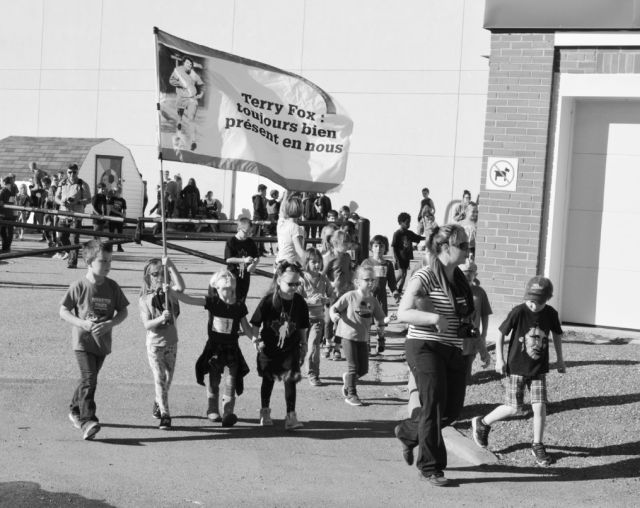 The morning was warm and the day bright, a perfect time to do what Terry Fox did 37 years earlier – demonstrate a commitment to help others in their hour of need.

Teachers, students and others at Ecole Heritage made their commitment to honour Terry Fox’s memory and held their walk/run around Falher in the morning of Sept. 28.

Joel Lavoie, the cultural coordinator for the school, held a talk with the students before they made their way around the community.

“But I’m not surprised because cancer touches everyone.”

He held his talk with them at the back of the school. Then they were off through the residential and business areas of the community.

Fire Chief Marcel Maure and others from Smoky River Fire and Rescue provided an escort for the teachers and students as they made their way around the community.

Some parents and siblings made the journey with the students.

“We always surpass our goal for the Terry Fox Foundation,” says Lavoie. “That’s a testament to the families.

For over 30 years, The Terry Fox Foundation has worked to achieve Terry’s vision – a world wihtout cancer.

Our researchers, our staff and our thousands of volunteers are determined to reach that goal. We strive daily to uphold Terry’s ideals and values in everything we do – and we always will.

Every year, Terry Fox Runs are held in over 9,000 communities across Canada, with the goal of raising funds for cancer reaseach. We work directly with the Terry Fox Research Institute (TFRI – the research arm of the Terry Fox Foundation) striving for the best outcomes for cancer patients.