Grande Prairie, Alberta –  Grande Prairie RCMP would like to advise that Dakota Jackson Grey has been located and is now in police custody. Grey was arrested at a residence in Grande Prairie without incident at approximately 3:30 p.m. today.

Grande Prairie RCMP are investigating an incident that occurred at approximately 12:22 a.m. this morning in which shots were fired at a grader in the area of 100 Street and 84 Avenue. Detachment members as well as Police Dog Service attended the location but were unable to locate the suspect. Police investigation revealed that the grader and the suspect vehicle were involved in a collision. The suspect exited his vehicle and fired shots at the grader. The male suspect then left the area on foot.

The driver of the grader was not shot but was taken to hospital with minor injuries and later released.

The Grande Prairie RCMP would like to thank the public and media for their assistance. This incident remains under investigation and RCMP continue to encourage any other witnesses who have not yet come forward to please call the Grande Prairie RCMP at 780-830-5700. If you want to remain anonymous, you can contact Crime Stoppers by phone at 1-800-222-8477 (TIPS), by Internet at www.tipsubmit.com, or by SMS (check your local Crime Stoppers www.crimestoppers.ab.ca

Grande Prairie, Alberta: – RCMP are seeking the public’s help in locating a wanted male who was also involved in an overnight shooting.

Dakota Jackson Grey, age 22, of Grande Prairie currently has a warrant for his arrest issued by Edmonton Police Service for robbery and was also involved in an overnight shooting in Grande Prairie.

Grey is considered armed and dangerous and could be in the Grande Prairie area.

Grey has a number of tattoos, including a very notable one on the left cheek of his face.

Anyone who encounters him is advised to not approach him and to contact your local police immediately.

If you have information on this or any other crime and wish to remain anonymous, you can contact Crime Stoppers by phone at 1.800.222.8477 (TIPS), by internet at www.tipsubmit.com, or by SMS (check your local Crime Stoppers [www.crimestoppers.ab.ca] for instructions on how).  You do not have to reveal your identity to Crime Stoppers, and if you provide information to Crime Stoppers that leads to an arrest(s), the recovery of stolen property, and/or a seizure of illicit drugs, you may be eligible for a cash reward. 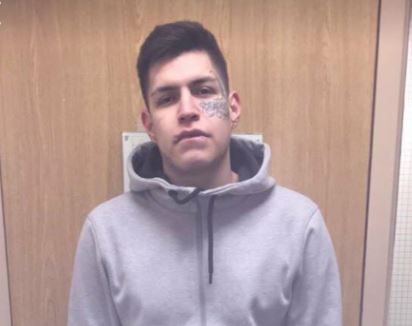