Grande Prairie, Alberta – Police have located both vehicles involved in this incident with assistance from the public. The investigation is continuing and efforts are still underway to locate the suspects involved.

Police would like to thank those that have come forward already with information regarding this incident.

The relationship between the RCMP and the members of our communities is a partnership. We need residents to be the eyes and ears of their communities and to report suspicious activity as soon as they are aware.

Grande Prairie, Alberta –  On Saturday, September 29, 2018 at approximately 1:00 AM Grande Prairie Rural RCMP responded to a report of a two youth males who had been assaulted before their vehicle was stolen.

The two males were parked at kilometre 17.5 of the Canfor Road south of Grande Prairie when their vehicle was approached by a white Ford truck. Two aboriginal males exited the truck and approached their vehicle with what appeared to be firearms. The suspects threatened and physically assaulted the youths before stealing their vehicle and fleeing the scene.

The teenagers were picked up by a passing vehicle and brought to safety. Both suffered injuries from the attack and were admitted to hospital.

Police are actively trying to locate the suspects, the suspect vehicle and the stolen vehicle.

Both suspects were described as:

The suspect vehicle is described as:

The stolen vehicle is described as:

If you have information about this incident, please call Grande Prairie RCMP at 780-830-5701 or call your local police. If you wish to remain anonymous, you can contact Crime Stoppers at 1-800-222-8477 (TIPS), online at www.P3Tips.com or by using the “P3 Tips” app available through the Apple App or Google Play Store. 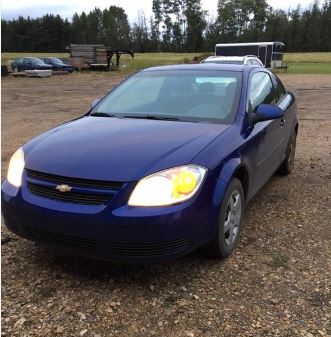