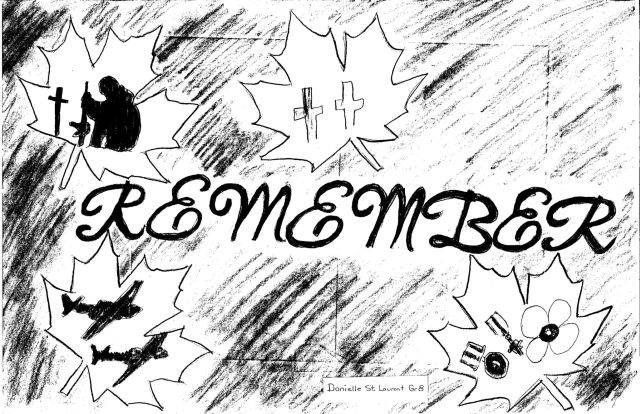 Students at Georges P. Vanier have submitted their posters and poems to the Royal Canadian Legion for judging in a contest.

The Royal Canadian Legion holds a poster and literary contest each year for Remembrance Day. The contest is open to all grades. They can submit coloured or black-and-white posters, as well as essays and poems.

“It’s their interpretation of why we need to remember those who sacrificed,” says Michelle Pitre, the teacher who organized the GPV contest.

With this story are two posters (the coloured poster is on Page 15) and three poems submitted to the Royal Canadian Legion in McLennan. Look for other submissions in next week’s Express.

What are Poppies?
by Christian Mencke
Grade 7

They say poppies remind them

Of the loved ones lost long ago

But what about this red flower

Is just the best?

My Mom says it reminds us

Of the ones that lie and rest

WH does everyone love

This flower so dear?

My Dad says it reminds us

Of the veterans lost and still here

How does this poppy

My cousin Sam says it reminds us

Of every soldier’s sacrifice

Now I’m starting to see it

Memories are starting to unfold

With a shredding tear

Everyone is crying now

Even with the tokens in place

I now see why poppies are hear

It’s to help us embrace

A giant piece of metal,

Flying down faster than any jet plane.

A fierce harbinger of death,

The fear of the innocent,

The reckoning of the wicked and damned,

The end to many lives,

Children watch in wonder of the unknown,

For they do not understand,

The bloody destruction of nations,

The unholy deaths of many,

Only god can tell now,

How it will come to close,

How many people will die,

The screaming sirens have risen,

But with one giant flaming mushroom cloud,

Everyone here ceases to exist,

The war flag has risen,

The fighting and death start once again,

The bombs have started falling …

And the clouds boom in despair

And the gunshots snap

The ground grey with ash

The soldiers stuck in a trap

The battlefield never again the same

For the soldiers who fought strong

Even if believed their actions wrong

As many soldiers lay in their death bed

While the calming red poppies blow