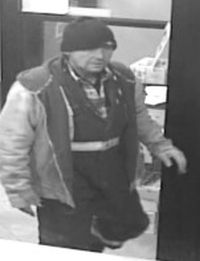 On Monday, February 19th at approximately 8:30 p.m., Grande Prairie RCMP responded to a robbery at a local liquor store. An unknown male entered the store wearing a mask and demanded money. He is described as:

Both males can be seen arriving and leaving the location together in small sized blue or purple SUV.

Police are requesting anyone with information regarding this matter to contact the Grande Prairie RCMP Detachment at 780-830-5700. Should you wish to remain anonymous, you can contact Crime Stoppers by phone at 1.800.222.8477 (TIPS) or by Internet at www.tipsubmit.com.