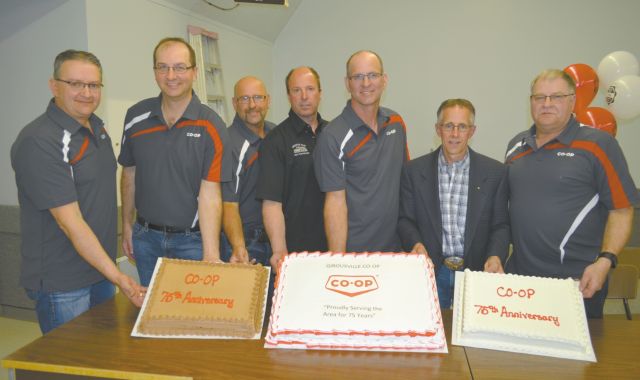 Mac Olsen
Express Staff
@SmokyRiverExprs
Girouxville Co-op Ltd. is 75 years young in 2017 and the organization is hosting a series of events to commemorate the anniversary.

The co-op held its annual general meeting at the Girouxville community hall in the evening of April 11. A large crowd turned out.

Following the dinner – which featured beef on a bun and cake to mark the anniversary – outgoing President Rene Blanchette welcomed everyone and he read the minutes of the annual general meeting and the financial report for 2016, and both were approved. Blanchette also read his president’s report and offered an historical perspective about the co-op.

“Good evening, fellow members, and welcome to our 75th annual general meeting. This evening, we officially begin our Diamond Jubilee Anniversary celebrations.
“Seventy-five years ago, a small group of visionaries from the local region believed that working together by pooling their resources, would enhance the quality of life not only for its members but to the greater surrounding region.”

This led to the co-op becoming a member of Federated Co-operatives Ltd.

“The vision was to provide a service that would source quality products in abundant quantities and establish a retail in which its members would share in the profits. Without question, the vision they had 75 years ago is still the vision that propels this organization today. Over the course of these 75 years, our co-op has seen many successful years, and at times struggled to meet financial needs.”

Blanchette also highlighted the construction of a new cardlock at their facility near Falher last year. The old bulk petroleum tanks were decommissioned and removed, too.

“This greatly enhances the traffic flow within the site and allows for overnight parking for transport vehicles,” he said.

Blanchette noted the financial challenges the co-op has faced in the last several years. For instance, due to the sluggish commercial and agricultural economy, fuel sales were down, which resulted in less margin dollars.

Also, the co-op’s patronage allocation from FCL was down, due to the decline in fuel purchases from FCL.

Blanchette concluded his report noting that special events are being held throughout 2017 to commemorate the 75th anniversary.

Then the board of directors presented him with a barbecue for his 27 years of service. Blanchette has stepped down and he is retiring.

Besides Blanchette, Louis Anctil and Rene Roy stepped down from the board of directors. An election was held as the last item on the agenda.

The new members on the board are Alain Blanchette, Hector Ouellette and Mike Paradis.