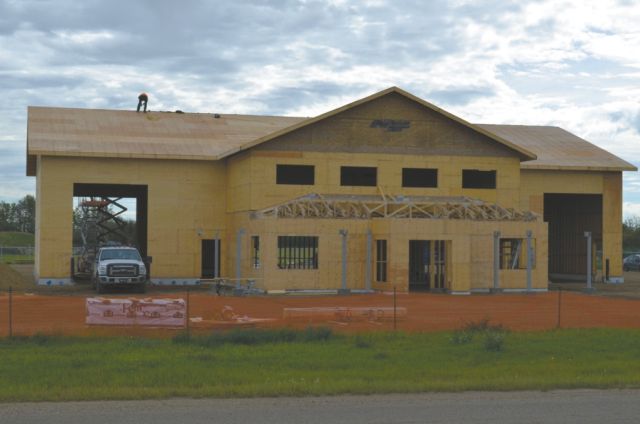 “This building is not going to be a Taj Mahal by any stretch of the imagination but it is going to be a really nice building,” says East Peace Gas Co-op manager Dale Dupuis.

“The construction is really strong and it should be a building that when people drive into town and look at it they are going to say, well this is a good business. It is providing value to the town and it looks good. It is not just a square box sitting there.”

East Peace Co-Op has been putting money aside from the beginning, for the 37 years that it has been in business for this project. Recently, they saw several reasons they should choose this time to build including looking at the recession and hoping to see some savings on tenders and on materials.

“We haven’t seen a lot of that,” says Dupuis. “The Canadian dollar for one, taking a hit, so we didn’t really save on materials, but at the same time we have taken that money that has been generated by the membership over 37 years and we have tried to spend it all locally.”

At present, with the exception of one contractor who is from Spirit River with family ties to Falher, everyone working on the estimated 1.5 to 1.75 million-dollar Falher building is from the East Peace Co-Op area, which includes Peace River.

“Generating employment in the area keeps those people around and the less people we lose the more business we have,” he says. “They may not be all farm boys but if the services are not in town, even our members have to go out of town to get services.”

Dupuis says it is a sad thing that they are moving out of Donnelly. However, he recognizes that the truth of the matter is that the commercial area is in Falher and with the advent with online banking and other developments not very many of their members come to the office anymore.

By moving to Falher and being on the main artery, Dupuis is hoping that brings people back into the office as he sees that contact with members as an extremely valuable thing for a Co-op.

“Once your members take you for granted and say this is a service, we want it, we will pay whatever, it takes away from the grassroots movement that this was.”

East Peace Gas Co-op currently has 975 actual members and run approximately 1300 services, with some oilfield and commercial business that are not considered members.

The Co-op’s territory goes from the Little Smoky River south of Falher to 24 miles northeast of Peace River to the Shell Institute and also goes to McLennan.

“We basically provide natural gas service to rural and small rural municipal areas like St. Isidore, the hamlet of Reno and the hamlet of Guy,” says Dupuis. “We have a long standing staff and know 90 percent of our guys.”

With the changes, East Peace Co-op will be bringing in more staff but of the current staff of six: three-fulltime people in the field, two women in the office and Dupuis who does field work as well as work in the office most have been with the Co-op for over 15 years.

“Myself, I have been here thirty-seven years. I am originally from Girouxville and I moved to Donnelly when I started working with the Co-Op,” he says.

Part of the decision in moving to the new building was to attract and keep qualified employees.

Dupuis recognizes that to keep properly trained staff, especially in a small rural area, having the right tools and the right atmosphere for people to work in is important.

“We’ve been really lucky as we have a really dedicated membership and we’ve had great support even with this building,” he says. “We’ve always had a vision of having a good building, something nice for the employees to work out of, where it is safe and clean; the right environment. And the more businesses you have in town and the better they look the more people come.”

Things are progressing quite well with the new building and if things go according to plan Dupuis expects that they will move in between early December and at the very latest in spring 2017.

“Until we saw the roof go up, we were thinking that we will never see this get done,” he says. “It just changes things. They are doing the tin right now and we are hoping to be pouring the concrete floors a week after. It’s going to change quick, the plumbers are in now and the electricians. I am still hoping for late 2016 but weather will be the dictating factor now.”

There have been some delays due to the rains this year but it appears that things are getting back on schedule.

Dupuis anticipates that the cold weather will slow things down a bit but if they are lucky, they will have the heating going by the end of September.

Initially reluctant to sell the lot, the town of Falher came back and offered the Co-op half, which was suitable to East Peace as they did not need the entire lot.

“The Town of Falher reached out to us and worked hand-in-hand with us very cooperatively to make this happen,” says Dupuis.

“The Town of Donnelly came here and tried to keep us but we had to look at things not just for today but more ten years from now and for the best interests of the company.
“Here in Donnelly, we have had great neighbours, the town has been excellent and we never had any issues.”

Speaking of the completion and the eventual move Dupuis sounds enthusiastic and is looking forward to the project becoming a reality.

“It is going to be such a relief,” he says. “It is going to be great to throw a grand opening and show off to our members what we have been able to accomplish with their help, to be able to show what we can provide to the community.” 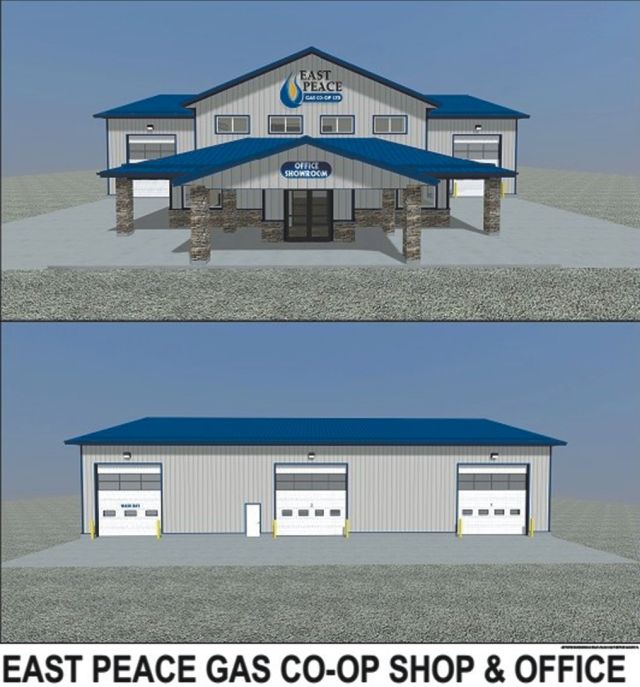