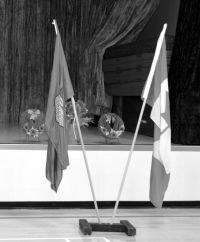 The Cree Code Talkers of the Second World War were the theme of this year’s Remembrance Service at Ecole Routhier in Falher.

The school held its Remembrance Day service in the morning of Nov. 9, with veteran Ray Cunningham and Constable Nicholas Fournier of the McLennan RCMP Detachment as the guests of honour.

Both participated in the flag ceremony to mark the opening of the service. Then all the students and teachers joined in to sing ‘O Canada’.

Later, Cunningham and Const. Fournier laid wreaths at the edge of the stage and offered a salute.

The emphasis of the Remembrance Day service was recognizing First Nations and other veterans of the First and Second World Wars.

One multimedia presentation, entitled ‘A Tribute to Canadian Heroes from Other Cultures’, highlighted Charles Checker Tomkins, a Cree Code Talker who served in the Second World War and was originally from Grouard.

Tommy Prince was also highlighted. Prince also served in the Second World War and was one of the most decorated First Nations veterans. But he died a homeless verteran in 1977.

The third veteran recognized was Sgt. Masumi Mitsui, who was the very last Japanese soldier of the First World War to pass away. He died on April 22, 1987.

William Hall was also highlighted. As per Wikipedia.org, Hall was the first black person, first Nova Scotian and the third Canadian to received the Victoria Cross, the British Empire’s highest award for bravery. He received the medal for his actions in the Siege of Lucknow, during the Indian Rebellion.

The 75th anniversary of the Dieppe Raid in France was also highlighted in the multimedia presentation.

Earlier this year, a Canadian delegation went to the Dieppe memorial and a First Nations ceremony was performed as part of an event held there.

Following the multimedia presentation, everyone stood for ‘The Last Post’, which included a moment of silence.

Another multimedia presentation covered the Cree code talkers, including interviews with veterans.

The last multimedia presentation was Nickelback’s music video, ‘If Today was You Last Day’, commemorating those who serve and have served in uniform for Canada.

The Remembrance Day service ended with Ray Cunningham commending the school for having him attend. He also wished everyone all the best.

Then Cunningham and Const. Fournier exited the gym with the flag procession.

The flags were then set up at the main entrance in the school.

Look for more Remembrance Day coverage in the Nov. 22 edition of the Smoky River Express.

This will include Ecole Heritage, Ecole Providence, Georges P. Vanier and the main service at the Elks and Royal Purple Community Hall in McLennan on Nov. 11.

PIC1: Above are the students who gave their thoughts about those who have served as soldiers, and they offered salutes as well. Left-right are Alissa Norris, Grade 6E; Brianna Ross, Grade 6E; Tanisha Laboucan, Grade 6E; Gabrielle Leclerc, Grade 6E; Jesse Johnson, Grade 5E; and Jackson McKay, Grade 5E.