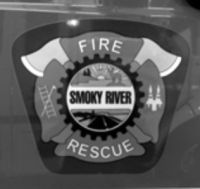 Fire Chief Marcel Maure gave his report to the M.D. council during their meeting on Aug. 10.

“It was a busy month, one of the busiest on record,” says Maure.

The breakdown of calls is as follows:

Maure also reminds drivers to slow down when passing first responders at the scene of an incident. There is a story about this issue in the Aug. 9 edition of the Smoky River Express.

At the Smoky River Fire Hall in Falher on Aug. 10, using a wooden model house, Maure showed how smoke travels through a structure. The model house had openings of various sizes that he opened and closed as a fire burned inside.