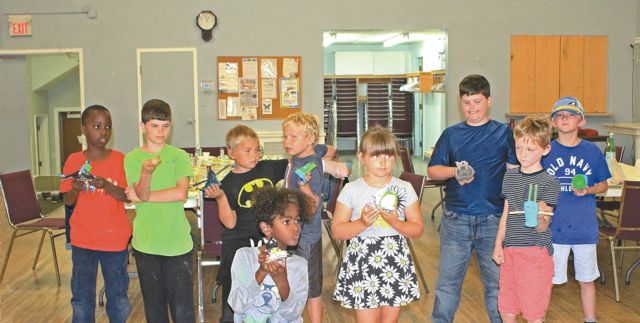 FCSS, 6-week Summer Youth Program began on July 4 and runs until August 17.
“Normally we do seven weeks, but this year we took one week out at the beginning of August and instead of doing the weeklong camp, we are doing three individual day trips for 10 to 16 year olds,” says Melanie Blanchette the summer youth program coordinator who oversees the weekly camp with program assistant Kristen Tardif.
“I thought I’d try something different this year because some parents were asking what is there for their older kids to do because the weekly camp only goes to 12 years old.”
The Monday to Thursday weekly camp, which is for children ages 6 to 12 rotates each week between Falher and McLennan for the first 4 weeks with the final two weeks held in Donnelly and Girouxville respectively.
The program starts at 9am with a variety of different activities and some fixed schedule activities.
Each week has a theme, such as “Lets Harvest about farming, Blast off about space, food frenzy and so on and activities during the week relate to that subject.
Some of the routine activities are swimming at Falher pool on Tuesdays and a beach day at Winagami Lake on Thursdays.
“On Thursdays when we go to Winagami we provide a lunch and snacks for the kids. We do a hotdog lunch on the fire, it is a camping day,” says Blanchette.
The three individual day trips on August 1st, 2nd and 3rd the for 10 to 16 year olds are to Peace River, Grande Prairie and EC Bar Ranch.
“The first one we are going to Peace River, getting a guided rafting trip on the river, having a picnic lunch at the park and then spending a couple of hours at the Peace River pool,” says Blanchette.
The second trip is to Grande Prairie, where the kids go to Jump Yard, an indoor trampoline park and to Trapped Entertainment to play an interactive escape game where you the kids get trapped in a room with thirty-five minutes to figure out a puzzle to escape before their time is up.
“The third trip is to EC Bar Ranch outside of High Prairie, and we’ve done that for the 3 years that I’ve been here.”
The three day-trips are already booked out but Blanchette says if someone is interested it is worth putting their name on a waiting list because there can be cancellations.
The weekly camps take a maximum of 15 kids and there are still spaces available for the camps at Donnelly and Girouxville.
Anyone looking for more information on the Summer Youth Program can call into the FCSS office at 11 Central Avenue SW in Falher or phone 780- 837-2220.