During Mass, Fr. Eucharius spoke to the students on friendship and used the analogy of strength in numbers to illustrate the power one receives from being a part of one’s faith community.

Showing a natural capacity to communicate with young people he demonstrated his point by showing how easy it is for him to draw one student forward, while having a few kids hold onto each other it became much more difficult because collectively they possess greater power.

The students participated in all aspects of the Mass: alter serving, singing, giving the readings and the bringing of the gifts. Those old enough received communion and the younger kids received a blessing.

Providence Principal, Krista Veitch sees these religious experiences and the children’s participation in the sacraments as the foundation on which a Catholic education is established.

“Many of the values we espouse are not of exclusive to Catholic schools but Catholic education is more than a 30 minute religion class each day,” says Veitch. “It is reflected in everything we do, it is an integral part of the entire function of the school, it is a view of the world that is all of one piece, morally, ethically and spiritually.”

Father Eucharius Chuyimagha, originally from Cameroon arrived in Canada from Nigeria where he spent the past 12 years.

Since taking up residence in McLennan Fr. Eucharius is quickly getting to know his parishioners and community members and he is obviously keen to be a strong presence in the community, taking the time for an informal visit with Providence students in their classrooms later in the day on February 9.

“The kids were excited that he came to see them at school, did a tour of the classrooms and that he went outside at recess to talk with them and watch them play,” says Veitch. “All of us at the school, both staff and students are looking forward to working with Father Eucharius and really welcome him to the school and to the community.” 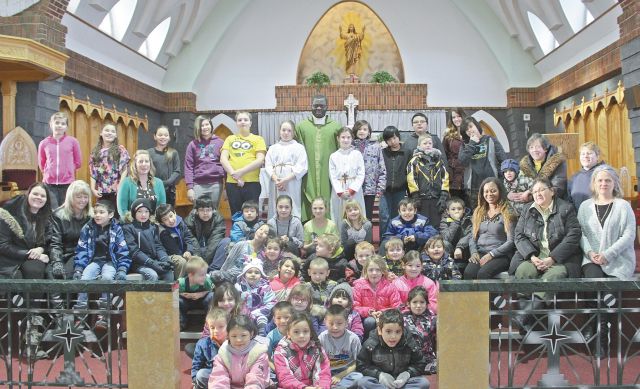