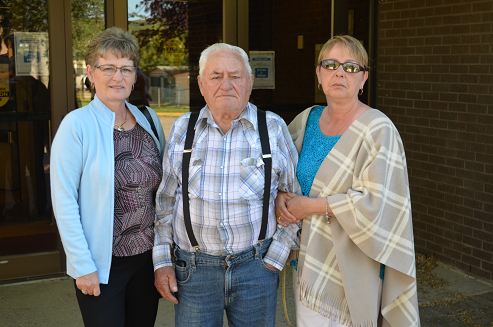 Pictured above, from left, are Barbara Pearson (sister of Melody Lee-Perry), Clarence Perry (father) and Brenda Adams (sister). They were at Edward John Chomiak’s murder trial in Peace River during Aug. 8-12 and talked to reporters outside the courthouse following his sentencing for the murders of Melody Lee-Perry and her daughter, Jerica Bouchard. Look for a video of their meeting with reporters, and a video of the defence counsel’s comments, on the Express’ Facebook page.

Edward John Chomiak has been found guilty of first degree murder in the death of his ex-wife, Melody Lee-Perry. He has also been found guilty of second-degree murder in the death of her daughter, Jerica Bouchard.
Chomiak’s murder trial was held in the Court of Queen’s Bench in Peace River during Aug. 8-12, after numerous delays.
Chomiak’s trial was by judge alone, with Madame Justice M.T. Moreau presiding. The first three days were devoted to court proceedings and testimony.
The fourth day was devoted to the verdicts and the reading of several victim impact statements.
The judge, Crown prosecutor and defence counsel had to determine the admissibility of some of the victim impact statements and one was excluded.
Some people chose to read their statements openly and others declined. The judge read the latter ones to herself and they were entered into evidence.
Chomiak was sentenced to life without the possibility of parole for Lee-Perry’s murder, and life without the possibility of parole for 15 years for Bouchard’s murder.
Naeem Rauf, the defence counsel for Chomiak, says he plans to appeal the convictions.
Look for an extended story in the Aug. 24 edition of the Smoky River Express. Also, look for a separate about the victim impact statements in the same edition. Also, look for video clips of the media interviews with the family and Rauf on the Express’ Facebook page.