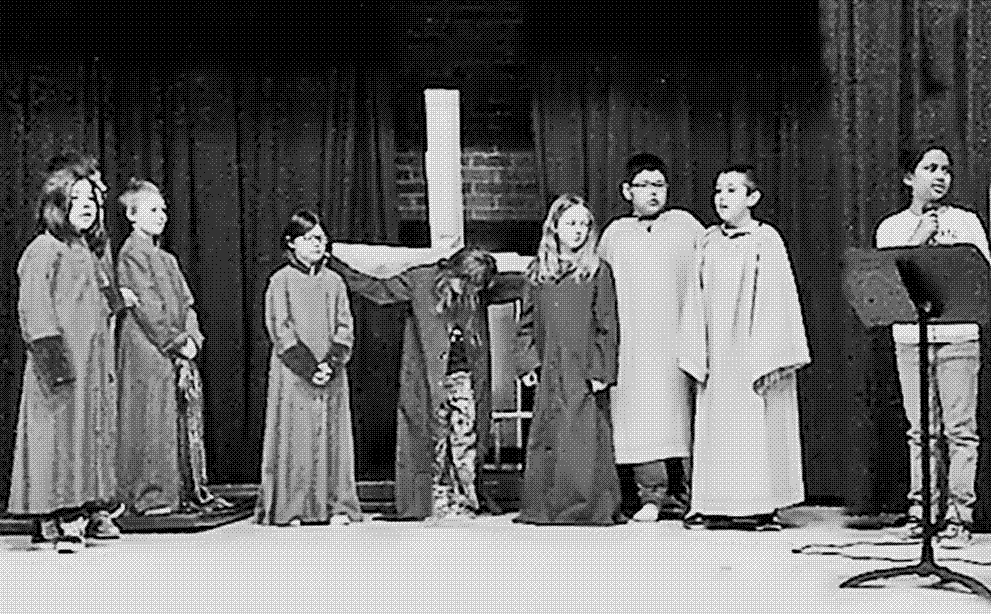 Grade 3 and 4 Ecole Providence students taking part in a performance of “The True Meaning of Easter,” created by their teacher Judith Mawoko.

To celebrate Easter, Ecole Providence Grade 3 and 4 teacher, Judith Mawoko, created a passion play for her students, appropriately called “The True Meaning of Easter.”
Act 1 opens with two children, Kayson and Grace, talking in typical fashion about Easter and of their expectations of chocolate eggs, bunnies, baskets of candy.
A third character, Amerie, overhears their conversation and comes forward to enlighten them as to the true meaning of Easter.
Neither Kayson nor Grace are easily won over by the biblical story of Easter and are dismissive of Amerie’s efforts to enlighten them.
When Amerie tells them of how the Savior came to save the world and about the death and resurrection of Christ at Easter, Kayson and Grace are dismissive, cynically and unfavourably comparing Christ to Superman and Spiderman.
However, Amerie persists and finally asks them to listen to her story.
Act 2 begins with Amerie reading from the Gospel of John, Chapter 19 and then the story of the Passion of Christ plays out on stage with the students taking on the respective roles of figures in the biblical story.
“Usually we do it here in the classroom but they really liked this story so they said ‘let’s try to do it in the gym.’ When they went on stage I was impressed that they had all memorized their lines, which showed that they were interested in the story,” says Mawoko.
Seeing their interest, Ms. Mawoko decided to go all out, getting robes and costumes to make a genuine production.
About twelve kids took part in the play, learning their lines and rehearsing for about two weeks before putting on a performance of the play for the teachers and other students at the school.
“They really got interested in it, more than I expected,” says Mawoko. “And they got even more excited when I got the costumes. They were saying that they wished their moms were there to see them.”
For parents and anyone in the community interested in seeing the students’ “True meaning of Easter,” performance it can be accessed by visiting Ecole Providence Facebook page.