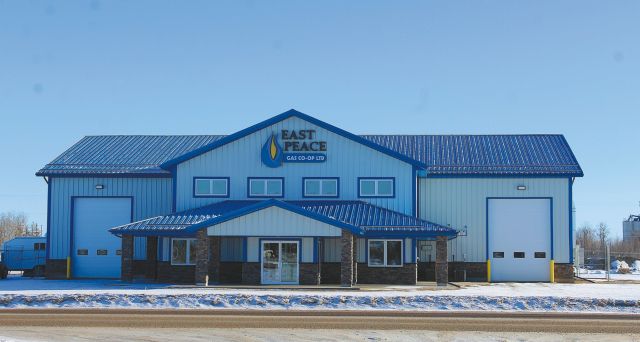 Tom Henihan
Express Staff
@SmokyRiverExprs
East Peace Gas Co-op, in business since 1979, moved into its new building on Main Street in Falher, Monday January 23. East Peace was at its previous location in Donnelly for almost 40 years.

“I started with them 37 years ago in what was the arena in Donnelly. That’s what it was, an arena and we had to go right from scratch, taking the boards out, pouring concrete,” says East Peace manager Dale Dupuis “It was baby steps all the time and now today, 37 years later, we are in some pretty fancy digs.”

The construction of the new building projected to cost between 1.5 to 1.75 million-dollars, came in within budget at approximately 1.6 million and only a few week over schedule.

“You know we have a lot of guys asking, ‘how much is this going to cost us?’ It’s not costing anything,” says Dupuis.
“We’ve been saving our pennies for the last thirty-seven years. We didn’t have to borrow for it, we weathered the rough times and came out on top. You put a little bit away all the time and at the end of the day well, the money is there and it’s paid for.”

Dupuis also points out that the building is made to last, that it is incredibly solid and is going to be there for a hundred years and he is justifiably proud of the accomplishment.

“There is something there in the community that I contributed to, I don’t know, call it a legacy project,” he says.
“And it’s the same for Paul Tanguay, our lead service guy, he really took the lead on the building.
“We’ve scratched and we’ve worked with what we could afford and sometimes we made do.”

Dupuis also recognizes that it is coming time for them to pull out and let someone younger take over and he is pleased that at least they are going to have something really good to start from.

Along with being a solid building, it is also has an attractive design both inside and outside. Its location and striking facade makes a substantial contribution to the town of Falher.

It was built anticipating the future with potential modifications and developments taken into account. Among its many features, the building has an expansive, bright lobby with reception and merchandise display area onto which the manager’s office opens. A large conference room upstairs can accommodate substantial groups and with a fitted kitchen, it provides self-sufficiency for those attending training, seminars etc.

The shop section is also spacious and comfortable, engineered and with a layout that keeps every contingency in mind.

Just off the shop, there is also a full wash bay.

“They have no excuse for running around with a dirty truck for a week,” says Dupuis. “We should be able to keep the trucks looking good.”

The guys working at East Peace certainly appreciate the new shop because previously they worked in an unheated building.

“So now they can come in here and work in a tee shirt; the atmosphere, safety and comfort is a world of difference and in this day and age you really have to reach out to keep people.”

The move to the new building is also happening at a time when East Peace Gas Co-op’s business has improved following the downturn in the economy. Dupuis says things are looking good and they are seeing a lot more activity in the oil patch.

“We were really concerned about our bottom line because our sales were down anywhere from 50 to 60 percent, but with a return to a normal winter, other than for a couple of weeks, the colder weather helped our sales and we’re back on line and back on budget,” he says. “We are ready for whatever they throw at us this year.”

Its territory extends from the Little Smoky River south of Falher to 24 miles northeast of Peace River to the Shell Institute. It also goes to McLennan though the area north of McLennan is primarily non-residential.

Along with manager Dale Dupuis, the company employs two office staff and three field workers with a new apprentice gas fitter position to be filled in the coming months.

And with the new building come some new initiatives, one of which is establishing a training centre for co-ops in northern Alberta.

“We are planning on becoming a training centre for the gas co-ops in northern Alberta because we are sort of central to High Prairie, Fairview, Spirit River, Wanham, Valleyview and Smoky,” says Dupuis. “So maybe if we can get them in here versus going to Edmonton, it will save traveling costs and save the Co-ops around here money.”

The training centre for the gas co-op federation is in Sherwood Park so people can lose a day or two to travel, along with the expense of hotel rooms and meals, so Dupuis recognizes that it makes a big difference if they can do things locally.

“I am figuring that we will be doing that within the next six months. It is definitely a focus and that is the idea behind having the kitchen so they can bring in their lunches for the training.”

The grand opening of the new building will take place sometime in late March but a set date has yet to be confirmed. East Peace Gas Co-op is looking forward to inviting its members to celebrate the opening and see what has been accomplished with their help and to show what the East Peace can provide to the community.