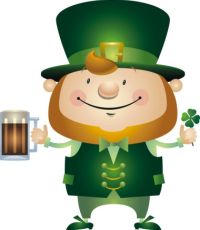 St. Patrick’s Day is rife with traditions, many of which involve food and drink.

While pints of Guinness might garner the bulk of the beverage attention on St. Patrick’s Day, that beloved creamy stout is not the only Irish-inspired drink to hoist on March 17.

In the mid-20th century, chef Joe Sheridan was working in Foynes, County Limerick, when a group of travelers who had been scheduled to fly to the United States became stranded due to inclement weather that grounded their plane.

When his weary travelers arrived in Sheridan’s place of business, he served the them coffee with some Irish whiskey mixed in.

When the group inquired as to what they were drinking, Sheridan reportedly told them, “that’s Irish coffee.”

1. Add the whiskey and simple syrup to a mug.
2. Fill the mug with hot coffee. If something extra is desired, top with whipped cream.