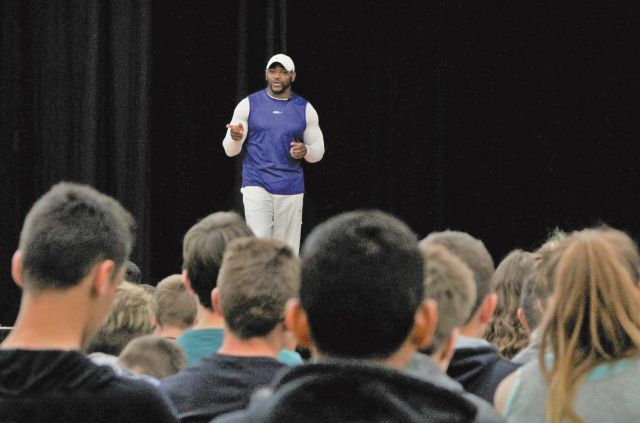 Tom Henihan
Express Staff
Many people elect to become motivational speakers, pontificating about the road to material success, offering techniques to reach one’s goals with little reference to the realities and challenges that many people confront.

Henry L. Williams, known throughout his professional football career in the US and Canada as Gizmo Williams has worked as a motivational speaker since his retirement from football in 2000.

Unlike many motivational speakers, Williams’ frame of reference is rooted in his own experience and if anyone is qualified to expound on triumphing over tragedy and adversity it is Williams.

Born in 1962 into abject poverty in Memphis, Tennessee, Williams lost both his parents at a young age; his mother died of multiple sclerosis Christmas 1969 when Henry was six and his father died in a house fire the following Christmas.

Williams has a family history of multiple sclerosis that along with taking his mother, the disease also claimed seven of his siblings.

On May 30, Henry L. “Gizmo” Williams came to the region to speak to students at G.P. Vanier and Ecole Heritage and later that evening gave a presentation at the Elks Hall in McLennan.

When speaking with the students Williams attributed his success not first to his athletic prowess but to having teachers who cared about him, who challenged him to perform to his best academically as he did naturally on the football field.

Following his parents’ death, his 21-year-old brother Edgar raised Williams along with six of his siblings until Edgar died also from multiple sclerosis, at which time an aunt raised Williams.

He spoke to the students of his experience going to a school where drugs and guns were commonplace, where fellow schoolmates were making between $15,000 and $30,000 a week in the drug trade.

He spoke of having friends driving to school in BMWs, Mercedes, Cadillacs, kids who seemed to have everything and he remembered asking himself why he needed an education. But he avoided that temptation.

“There are no shortcuts in life,” he said. “All those kids that could make $30.000 a week, who were wearing all the nice clothes, living a fast life… Well, when I went back home for the first time in 1993, some of those kids had been to jail, some were still in jail, some were living on the street and the rest were dead.”

Williams told an amusing but enlightening story about learning about Canada when attending school in the southern US. His response to the subject was typical; believing that he was never going to Canada learning about it was a waste of time.

Twenty-five years later he received a call to come to Canada to play with the Edmonton Eskimos. He said he didn’t know where he was going so he got a brochure and in it was the identical same map he was given in school and he wished he had paid more attention back then.

“In class, I’m thinking that I am never going to Canada but I’ve been in Canada about 30 years now, Edmonton is my hometown. So what you are being taught now you will need again in life in some kind of way.”

He said he was one of those kids that peer pressure didn’t bother, that he was constantly told he was not smart enough to go to college and that he was too short to be a professional football player. However, Williams graduated from East Carolina University and after his graduation the Memphis Showboats signed him.

In 1985, after only one season, Williams was released by the Showboats and signed with the Edmonton Eskimos. Other than, a very brief stint with the Philadelphia Eagles in 1989, Williams played every Canadian Football League for the Edmonton Eskimos from 1986 until he retired in 2000. During his tenure with the Eskimos he set over 20 CFL records.

Williams enduring trademark came from his habit of doing a body flip whenever he scored, a display that always delighted fans.

Williams is compelling when he talks, as he speaks from the perspective of someone from humble and adverse beginnings who possesses the discipline and self-knowledge it takes to rise about his circumstances to receive a good education and become a star athlete.