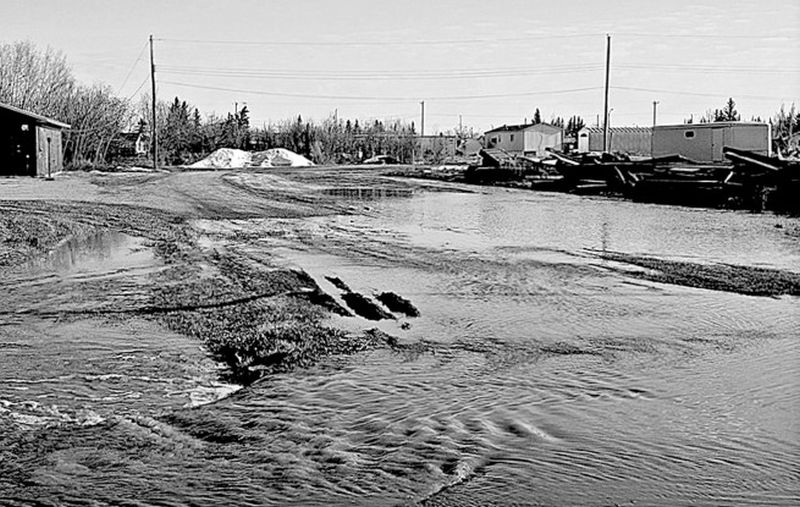 Some municipalities in the Smoky River Region experienced the threat of serious flooding this spring, but due to the preparedness and quick response of the Fire department, Public Works’ employees, and the assistance of members of the community, no damage was sustained by any of the municipalities.

Beginning on April 9, Girouxville had to deal with drainage problems, which called for a steady pumping regimen for about a week.

Having only one fulltime Public Works employee, the village called the Fire Department and its volunteers spent a couple of nights manning the pumps.

On April 24, Girouxville had flooding coming in from the north end of town with more water than the storm sewers could handle, so the village began pumping again for a day.

“The canal started coming over the road to the community centre but caused no damage to the hall due to the quick response of the Fire Department,” says Girouxville CAO Estelle Girard. “They built up the berm along the canal and cut a channel in the road to divert the water, which saved the village from serious damage. “

“It was just labour-intensive with a lot of overtime for pumping, but we ended up with no damage, so we were lucky.”

Donnelly had the threat of serioius flooding due to an overflowing ditch running over 3rd Street. The Fire Department put in place a water-filled berm, containing the water between North Avenue and 3rd Street.

“In order to be pro-active we had to dig up the pavement on 3 Street just north of the railroad track to encourage the water to flow in that direction,” says Donnelly CAO Rita Maure who added that no damaged was caused and she attributed the Fire Department putting in place the berm to saving the village from serious flood damage.

While McLennan didn’t experience any flooding issues, CAO Lorraine Willier praised Public Works for doing an excellent job, having been proactive in ensuring culverts, catch basins and drainage ditches were prepared for when the snow melted.

Falher CAO also says that the town didn’t exhaveany flooding crisis and she also attributed the situation to the pro-active job Public Works did getting out ahead of the situation.

The MD also had numerous flooding issues to contend with.

“The response from the Municipal District of Smoky River #130 staff was extraordinary,” said MD CAO Rita Therriault. “They were there helping our residents, they were looking out for the safety of everybody and made really good decisions.”

Therriault called it “an extraordinary response from a volunteer group.”

Therriault also gave kudos and expressed great appreciation of council who were out patrolling, to locate where damage had occurred.

“We had staff that did not sleep for over twenty-four hours. It was a great, great, response.” she said.

The MD has applied for a disaster recovery program and is waiting for Cabinet to be in session to see if they will put programs for disaster recovery in place. The MD should learn sometime in June if its application has been approved.