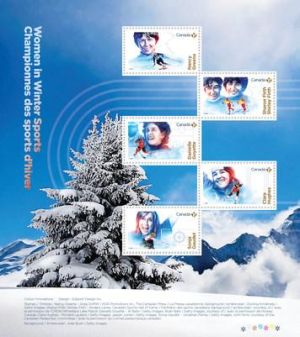 Weeks before the cauldrons are lit for the Winter Olympic and Paralympic Games in South Korea, Canada Post lifted the veil on stamps that honour some of the most accomplished athletes Canada has known.

“Sport is a vital element of our cultural fabric. It has the power to build bridges between people of all ages, backgrounds and abilities,” says the Honourable Carla Qualtrough, Minister of Public Services and Procurement. “The women of these stamps have contributed to Canada beyond the medals they’ve won or the records they’ve broken. As a group, they have been champions of accessibility, community-builders and thought leaders.”

“The women who share the podium in these stamps broke barriers, inspired generations and have contributed to our country’s national story both on and off of the ice and snow,” says Deepak Chopra, President and CEO of Canada Post. “They have been ambassadors for their sports, impressive role models and a great source of national pride.”

The stars were honoured January 24th at Canada’s Sports Hall of Fame in Canada Olympic Park, a hub of winter sport.

Shirley Firth, who passed away in 2013 at age 59, was represented by her husband, Jan Larsson, and daughters Marie and Nina Larsson.

The stamps and all related products are available at retail outlets and online at canadapost.ca.

Sharon and Shirley Firth transformed Inuvik into a hotbed of Nordic skiing.

They competed in four Olympic Games and four World Ski Championships and dominated their sport from the late 1960s to the mid-1980s, winning 79 medals at the national championships, including 48 national titles.

A tireless advocate for accessibility, she is an ambassador with the Rick Hansen Foundation and the Paralympic Committee.

She was inducted into the Hockey Hall of Fame in 2017.

Nancy Greene put Canada on the map in alpine skiing.

Clara Hughes is the only athlete in history to win multiple medals at both the Summer and Winter Olympic Games. She made six Olympic appearances, winning six medals: one gold, one silver and four bronze – in cycling and speed skating.