Home News At the going down of the sun and in the morning, we will remember them 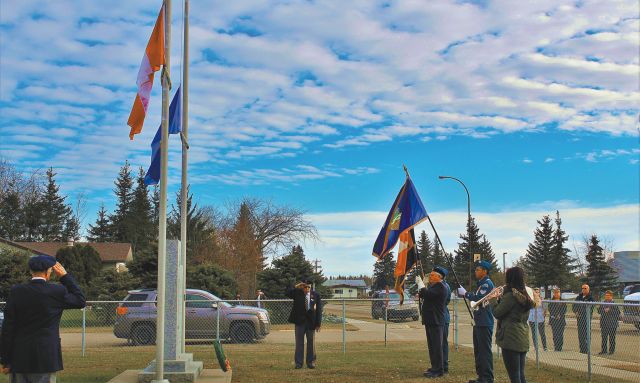 Tom Henihan
Express Staff
@SmokyRiverExprs
“This is the eleventh hour of the eleventh day of the eleventh month, 2016, ninety-eight years after the armistice that ended the First World War,” said McLennan Legion President, David Champion, at the opening of this year’s Remembrance Day Ceremonies. “It was the war to end all wars supposedly but we know that didn’t work out very well, so we have to remember our veterans.”

“As we pray this morning please pray in a fashion to which you praise the Lord for there is no special way to adore and to pray to the Lord for peace and to honour those who suffered and died during wars and conflicts.”

Deacon Bouchard then asked those present to recite the refrain “God give peace,” after each intercession and then began the prayer:

Let us pray for all who suffer as a result of conflict and ask that God may give us peace for the service men and women who have died in the violence of war. Each one remembered and known to God:

At the end of the benediction prayer, Megan McNeil played the Last Post succeeded by two minutes of silence.

“During the two minutes of silence,” David Champion addressed the crowd, “we will remember our fallen comrades and those who passed away since we last gathered here, in our case locally, Donald Fish, who served many years in the Air force and was also a pillar of the community and particularly the Legion.”

Prior to introducing the guest speakers Mr. Champion read from the poem ‘For the Fallen,’ written by Robert Laurence Binyon commemorating those lost in the First World War:

They shall grow not old, as we that are left grow old:

Age shall not weary them, nor the years condemn.

At the going down of the sun and in the morning,

We will remember them.

Guest speaker Francis Lessard, talked about next year being, along with Canada’s 150 Anniversary also the centennial of the Battle of Vimy Ridge. He pointed out that Canada’s role in that battle proved a seminal event in forging Canada’s identity and its sense of stature as a nation.

Lessard recommended that people read about that battle and maybe, to mark the 100 anniversary they visit Vimy Ridge next year as a meaningful alternative to heading down south to Arizona or Mexico.

He also spoke about his friendship with Don Fish and how he enjoyed being enlightened and regaled by Mr. Fish’ many stories.

“I am sure he is looking down on us,” said Lessard, “so let’s give him a hand,” to which everyone present joined in unanimous applause.

Lessard finished with reading a short poem advising that we should always mobilize against oppression and tyranny even when it does not affect us directly.

The poem suggests that if we wait until we become the immediate target we will then find ourselves alone and defenseless and tyranny will prevail.

Everyone joined in singing ‘Let there be Peace on Earth’ prior to the second guest speaker, Regional Fire Chief and former sergeant in the Canadian Armed Forces, Marcel Maure.

Maure elaborated on the definition of a veteran, noting that our concept of what defines a veteran is often narrower than the reality.

While many see those who fought in the First and Second World Wars and in Korea as veterans not realizing that all those who serve and are honorably discharged from the Royal Canadian Navy, Royal Canadian Army, Royal Canadian Air force and the RCMP are all veterans, regardless of whether they served overseas or have seen conflict or not.

The H.W. Fish $500 bursary, presented by Terry Dunn was given to Kristian Skrepnek.

The Order of the Royal Purple $300 annual bursary, presented by Jeanne Labbe went to Eden MacInnis.

After the wreath laying ceremony, with 25 wreaths placed on the stage at the Elks Hall, David Champion thanked everyone for attending.

He then extended an invitation, following the parade and laying of the wreath at the McLennan Royal Canadian Legion cenotaph, to come and enjoy lunch at the Legion.

Mr. Champion invited everyone to the 6 pm, by donation, traditional Remembrance Day roast beef supper that was also at the hall.