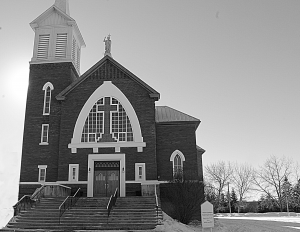 Step into spring is a Fashion Show fundraiser featuring Du North Designs and a number of local vendors who will have their products for sale.
Sponsored by the Catholic Women’s League and St. John the Baptist Parish the objective of the fundraiser is to raise money for the upkeep and repairs of the Church.
While repair work is always a work in progress that includes painting, replacing carpeting and installing new eves-troughs, the principal objective of the fashion show fundraiser is to repair broken steps leading to the front doors of the St. John the Baptist Church, hence the “Step into Spring” fundraiser title.
Pope Paul VI created the Archdiocese of Grouard-McLennan, as a gift to Canada on its centennial in 1967. From 1927 to 1967, the archdiocese was the Apostolic Vicariate of Grouard, essentially a missionary region expected to increase in population and eventually become financially self-sufficient.
However, due to limited financial resources, a widely dispersed population and many remote communities, Grouard-McLennan continues to be a missionary diocese, relying on the Catholic Missions in Canada and the generosity of donors to maintain its parish churches and to support its missions and priests.
Du North Designs will exhibit both a winter and spring line of clothing, with an intermission between each seasonal display. Thirty-seven local volunteer models will take part covering the spectrum in age from a newborn infant to a woman of 92.
On March 1, Du North Designs moved from its space at the McLennan Chancery Office to its new location in the north wing of Ecole Providence, so there will be easy access to the store following the show.
An estimated eight vendors are participating in the fundraiser. The notable Joanna Bisely Designs, handcrafted jewelry offering both her signature casual, everyday line as well as her bridal collection. Other vendors are Scentsy, Arbonne, Barn Board Art, Thrive Foods, Epicure and Mary Kay, Thirty One and Betty Zahara yarn crafts.
The vendors are offering a wide variety merchandise including arts and crafts, scented goods, speciality foods and skin care products.
Helene Hauseler and Claire Cloutier of Ritz it Up have volunteered to decorate the venue for the event.
The Step into Spring Fashion Show is on Sunday March 6th at Providence School Gym. Doors open at 1pm for those wishing to browse the vendor’s tables until the fashion show begins at 2pm. Admission $10 and refreshments are included.